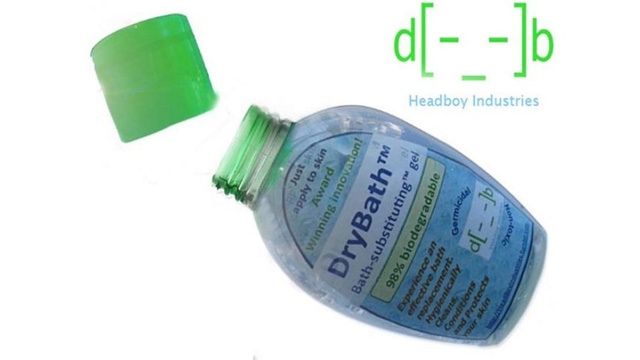 For people who don't have time to bathe or access to fresh water, a South African college student has a solution: a shower gel users simply rub onto their skin. One small packet replaces one bath, and users never need any water. Ludwick Marishane's inspiration was a lazy friend in the need to bathe, but his invention will be a boon to people who live in areas where clean water is in short supply. The gel, called Drybath, kills germs, moisturizes the skin and exudes a pleasant, light smell, unlike hand sanitizers, according to Marishane's website, Headboy Industries. The gel is packaged in small, easy-to-open sachets that were a South African invention. Marishane got the idea to sell individual packets when he learned from mentors that the world's poorest people buy things in very small quantities, such as one cigarette at a time as opposed to a pack or a carton, he said in a presentation.

In poor communities, Marishane said he sells Drybath for 50 cents a packet, according to an interview with the Global Student Entrepreneur Awards. (Marishane won the competition's top prize in December 2011). For corporate customers, such as airlines or hotels, each Drybath packet costs $1.50. Marishane donates one packet to charity for every corporate packet sold. Marishane wants the company he founded, Headboy Industries, to become a "huge conglomerate" comparable to GE, while developing novel products for the world's poorest people, he said.

Reply Joogtremy
8:06 PM on June 26, 2022
sildenafil from mexico how much is viagra in usa https://viagraadultsed.com/

Reply lilly tadalafil coupons
8:50 AM on October 5, 2021
My family members all the time say that I am wasting my time here at net, however I know I am getting knowledge every
day by reading such good articles or reviews. https://tadalafili.com/

Reply does albuterol inhaler help cough
1:30 PM on October 2, 2021
I think the admin of this web site is genuinely working
hard for his site, for the reason that here every information is quality based material. http://herreramedical.org/albuterol

Reply SntdReam
1:03 AM on September 19, 2021
essay writing services singapore write my essay for me no plagiarism

Reply cialis buy
7:15 PM on September 18, 2021
My family members all the time say that I am killing my time here at net, except I know I am getting
experience daily by reading thes pleasant content. http://ciaalis2u.com/