Floating Cinema Brings the Silver Screen to the Sea 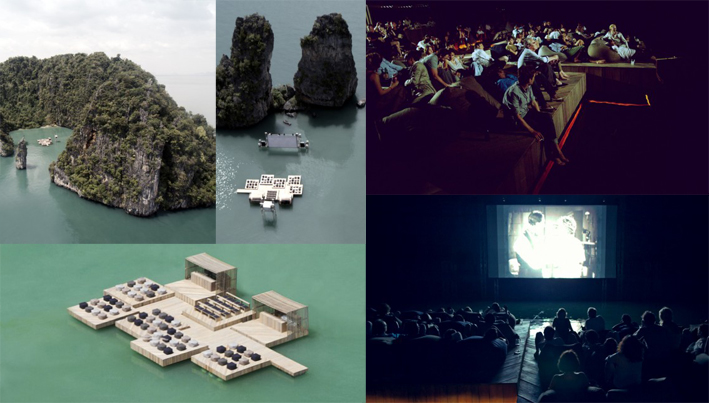 We came across something we hadn’t seen before. The Archipelago Cinema by Beijing-based architectural firm Buro Ole Scheeren, which has brought movies to the sea. Premiering at the inaugural edition of the annual Film on the RocksYao Noi Festival, curated by Apichatpong Weerasethakul and Hollywood actress Tilda Swinton, the floating cinema consisted of a mobile auditorium installed on a group of modular rafts. The pieces were towed out to the Nai Pi Lae lagoon off the coast of Kudu Island, with another raft housing a screen placed into position. Much like a drive-in cinema, festival-goers then rowed out to the scenic location for the screening. As well as being an intriguing architectural design for the movie experience, German-born Ole Scheeren ensured that the rafts were made from locally-sourced recycled materials using local techniques— the island’s lobster farmers use similar rafts to catch their produce. Following the end of the festival, the rafts pieces will be used in other locations as a cinema on water, before being given back to the local community to use as stages or playgrounds until next year’s celebrations. The Archipelago Cinema brings a unique spin to the pop-up cinema trend and locally-sourced materials ensure that it is sustainable and beneficial to the area in which it operates. Certainly one to inspire a similar project.